On Monday, September 26, 2011, I volunteered for the University Lecture Series (ULS) when they presented Common:  One Day It’ll All Make Sense. This is also the title of his book, which you can find here.

I knew I wanted to volunteer for ULS when the schedule was posted at the beginning of the semester. Once I learned Lara Logan (which is now canceled) would be a guest I did whatever I could to be a part of the group.

Once I arrived I was given a volunteer lanyard and a staffing schedule letting me know what role I would be in charge of.  It was storming on this night and Common was running late.

My role was event greeter. My job was to stand at the entrance of the Marshall Student Center and inform attendees on where to go. This event was open to the public and it was really interesting to see how an event of that magnitude was executed.

During the Q&A portion of Common’s lecture, a student gave him a drawing they had done of him. After the lecture I went to gather my stuff out of the room and while I was leaning down I saw the drawing. I said, “Wow, that is really cool.” However, I had no idea the person holding the drawing was none other than Common himself. Lol. I would do something like that.

ULS gathered the volunteers at the end and thanked us for our help and Common said he thought we did a wonderful job. They also presented Common with a scrapbook of student letters, which I thought was a great touch.

Here is an article from USF’s newspaper about the event! 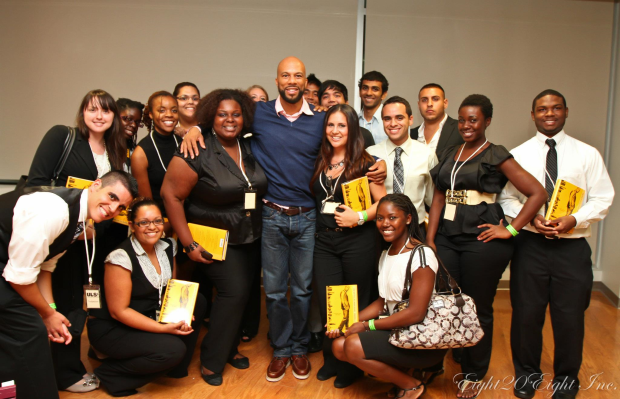 My favorite part of the lecture was the beginning when Common did a rap. This wasn’t just any rap – it was a rap specific to USF… GREATNESS right there!

3 thoughts on “My Volunteer Experience”